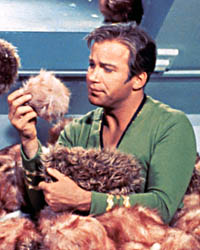 • Bryan Fuller, creator of Pushing Daisies, wants to do another Star Trek television show in the style of the original 1960s series. Miniskirts and go-go boots for the win!

• Doctor Octopus portrayer Alfred Molina has signed on to play an evil sorcerer in Jerry Bruckheimer’s live-action Sorcerer’s Apprentice remake. But who, oh who, will play the magic brooms?

• Leonardo DiCaprio has been tapped to star in Christopher Nolan’s next movie, the scifi-ish Inception. Nolan can do no wrong in my eyes, and DiCaprio’s surprisingly solid: This is one to watch.

• Wil McCarthy notes the eerie similarity between Coraline and Hellraiser.

• SF Signal hosts another fantastic mind meld, this time flipping a hoary old chestnut upside down: What non-genre books would you recommend to scifi omnivores?