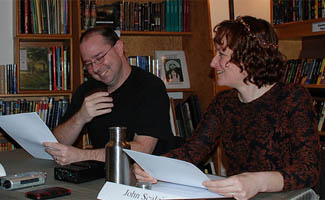 SciFi Scanner is pleased to announce that two of our esteemed columnists, novelist John Scalzi and author Mary Robinette Kowal, have together received a total of four 2009 Hugo Awards nominations.

John Scalzi — the recipient of last year’s Best Fan Writer Hugo — received a Best Novel nomination for Zoe’s Tale; his book Your Hate Mail Will Be Graded: A Decade of Whatever, 1998-2008 is nominated in the Best Related Book category, while his audiobook anthology, METAtropolis, received a Best Dramatic Presentation, Long Form nomination.

Mary Robinette Kowal — the recipient of last year’s John W. Campbell Award for Best New writer — received a Best Short Story nomination for her work “Evil Robot Monkey,” an examination of art and the creative process, and, of course, a cybernetically enhanced primate.

Award winners will be announced on Sun., Aug. 9, at the Palais des congrès in Montreal. Best of luck, John and Mary!