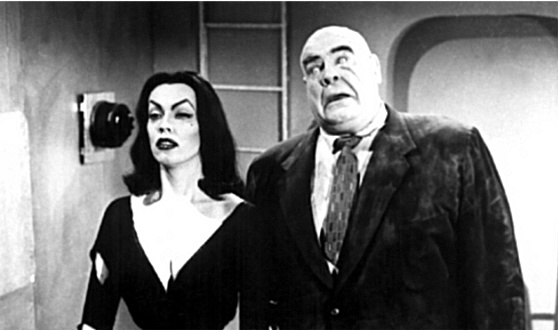 That “B” in “B-movie”? It stands for brains. Bad brains. Ask yourself: Who creates killer viruses, mean machines and weapons that can knock the earth off its axis, convert the atmosphere into a toxic cloud, boil the ocean or resurrect the dead? That’s right: High-IQ lab jocks who poisoned their brains with excessive rumination. Brains… they’re trouble. Plus, brain damage comes in many forms.

Alien-ated Brains: Blame it on spacemen

The Brain Eaters (on AMC tonight, 4AM EST): Grade-Z mini-aliens co-opt the brains of small-town losers. Listen carefully to the guy who looks like an Old Testament prophet in a Jedi cloak: Yes, that’s Leonard Nimoy, probably wondering whether it’s time to get a real job, or at least a gig where they spell his name right.

Invaders from Mars : What if Martians took over your parents’ minds and nobody believed you? A marvel of eye-popping color and surreal set design, Invaders traumatized the boomer generation.

The Brain That Wouldn’t Die : A doctor preserves his late fiancée’s brain (and head) in a tray while he shops for a new body. Why is she being such a shrew when he’s only ogling double-stacked strippers and cheesecake models for her benefit?

Donovan’s Brain : A doctor keeps the brain of a deceased millionaire alive in a tank; the ungrateful organ messes with his mind. Curt Siodmak’s novel was also filmed as The Lady and the Monster and The Brain.

They Saved Hitler’s Brain: …in a jar, and they were sorry. But not as sorry as this mish-mash cobbled together from a short feature made in 1963 and padded with new footage shot five years later.

Doctor of Doom: Mexican madness! A doctor gives a man the brain of a gorilla and incurs the wrath of a sexy lady lucha (masked wrestler). What did I say about gorilla brains?

The Atomic Brain: A wealthy crone hires “Doctor Frank” (clever!) to put her wrinkled cerebellum into a ripe young body. Make a note: Don’t hire the surgeon who gave his assistant a canine brain (see above).

Brain of Blood: A dying Middle Eastern potentate arranges a to have his grey matter transferred to a classy new chassis and is sorely disappointed with the results. Schlockmeister Al Adamson’s contribution to the brain drain.

Fiend Without a Face : Imagine brains with spinal-cord tails, creeping along like inchworms before launching themselves at the back of your neck. Next stop: Nightmareville. Does your brain hurt yet?

Frankenstein : You’re a brilliant scientist creating human life from charnal house scraps, so you send some lowly assistant to pick up a brain. And you’re surprised you get the one from a jar marked “abnormal?” Repeat mistake at regular intervals.

To see one bad brain in action, check out The Brain Eaters on AMC. See full schedule.