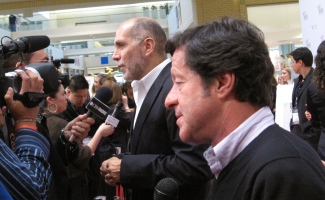 In the drama The Burning Plain, actor Joaquin de Almeida ( Clear and Present Desperado ; pictured at right) plays a man with a mysterious link to a restaurant manager (Charlize Theron). Here in Dallas, though, de Almeida was playing the role of gracious guest: “I love coming to Dallas; I hope people in Dallas love the movie as much as we loved doing it. “

The directorial debut of 21 Grams and Babel writer Guillermo Arriaga, The Burning Plain‘s plot can’t be over-explained for fear of diluting the movie’s mysteries. Star de Almeida admitted that can make it hard to do publicity. “It’s hard to talk about it, you can’t say what the story’s about,” he said. “You have to think… only halfway during the film do you begin to understand what’s going on. It’s like the Hitchcock films — let it go, [enjoy the] suspense. It’s a drama, but it’s fun to watch.”

Writer-director Arriaga (pictured at left) was also glad to be in Dallas: “I’m presenting the film the first time it’s been shown in Texas. It’s opening in September, but I’m very happy to be here in Dallas.” Arriaga even had a touch of the opening night jitters: “Always, you are nervous when you show it to a different audience, but I’m sure that the American audience is going to like it. It has to do with themes that are alive right now in the society of America and Mexico, and I think it’s important.”

Arriaga also had praise for two of his stars, Theron and Kim Basinger: “I think it’s the most tremendous gift someone can have, to have two legends of cinema, two of the best actresses of all time, two Oscar winners,” he said. “They’re truly humble people; you can’t imagine how committed to the film they were.”