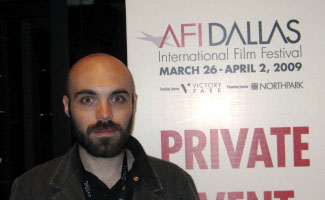 At AFI Dallas, a special section of the program is devoted to movies from Texas — movies like The Other Side of Paradise, Desdemona: A Love Story, Zombie Girl: The Movie and St. Nick, the feature-length debut of writer-director David Lowery.

Revolving around a pair of siblings on the run, an 11-year old boy (Tucker Sears) and his 9-year-old sister (Savanna Sears), Lowery’s St. Nick is a spare, beautiful and haunting drama. Lowery (pictured) explained his lifelong, complex love affair with Texas: “I moved to Texas when I was 8 years old, which is around the age of the characters in the film. And I moved here thinking it was going to be a big desert with cowboys. And it’s not; it’s really an impressive vista that no one ever gets an idea of until they come here.”

Lowery explained how he came to terms with his new home state: “At first I resisted Texas. I didn’t want to be Texan when I moved here, but gradually I realized I am Texan; I love this place, and I really wanted to capture the Texas that I loved, and have it be a character in the film.” Lowery’s movie has been earning acclaim for its charm and craft, as well as its minimalist depiction of the state’s wonderful strangeness and it’s nods to classics: “I knew Night of the Hunter was an obvious (influence) and we pay homage to it … Terrence Malick ( Days of Heaven , The Thin Red Line ) is another Texas film maker; [there’s] an obvious Malick influence in [St. Nick].”

Lowery also spoke to AFI Dallas’ role as an incubator for Texas’ movie making community: “I think it is of growing importance… and will only become more important as long as they keep programming these great films. AFI Dallas is really great at bringing out those audiences in mass numbers for films they otherwise wouldn’t have seen.” Most impressive of all? “We just had our screening this morning and sold out a 300 seat theater,” he said. “I had no idea there’d be that big of a crowd here to see a film about two runaway children.”