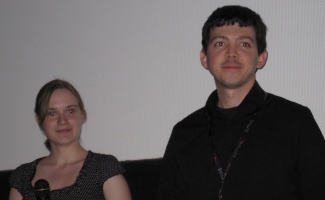 Horror was on the agenda at AFI Dallas on Saturday, with an evening screening of the shock-doc Zombie Girl: The Movie, about Austin, Texas 12-year-old Emily Hagins (now 17, and pictured with Zombie Girl: The Movie co-director Aaron Marshall) and her quest to make the feature-length zombie flick Pathogen. Earlier in the day, a panel titled “Scary Symbols: How do Horror Films Show Us What’s Really Scaring Us?” looked at the genre with Grace director Paul Solet, horror-short Hunger director Chad Jackson, scream-queen actress Tiffany Shepis and your correspondent, James Rocchi of AMCtv.com. Moderated by AFI PR head John Wildman, the panel looked at the genre as a skeleton key for unlocking social anxiety.

Shepis, a veteran of Live Evil and Night of the Demons , believes that people can find whatever scares them most inside the plots or creatures of the genre: “I don’t find zombies particularly scary; they’re slow and they’re stupid and it’s easy to kill them; the fear for me with that is ‘What if you did lose control?’ And that loss of control is what freaks me out about a crazy zombie flick while someone else is saying ‘No, no, it’s not that at all …’ and they find zombies actually scary.”

Grace writer-director Solet expanded on the possibilities in the genre, and how it all comes down to the basics: “Whatever’s happening politically and whatever intention a filmmaker has, socially or politically, I think, for me, it comes down to these very sort of fundamental fears; you break them up into certain categories. You have films that are strictly visceral, that are about fear of bodily harm or bodily violation, like the Saws, the Hostels, and then you have more psychological stuff, where you explore fear of the known, fear of the unknown, fear of losing control of your body.”

And at the evening screening of Zombie Girl: The Movie, the struggles and triumphs of Hagins won the crowd over with a tale of fake blood, real sweat and a few tears: Now 17, horror auteur Hagins shared her influences in the post-screening Q&A; “Right now, (my) biggest directing influences would be Danny Boyle and Robert Rodriguez … and zombie movies: Undead , Night of the Living Dead , Shaun of the Dead . …” Co-director Aaron Marshall clarified: “Anything with ‘Dead‘ in the title.”