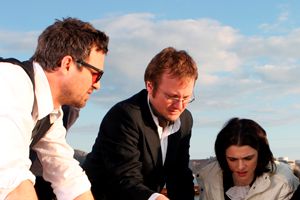 Tonight, the 2009 edition of AFI Dallas will open with Rian Johnson’s The Brothers Bloom, a family con caper starring Adrien Brody and Mark Ruffalo as the titular sibling schemers. Director Johnson spoke about how pleased he is his movie was selected to begin the festival: “We did a screening for AFI in L.A. a little while ago, and it was a lot of fun. I’ve never been to Dallas before and I’m excited to see the city,” he said. “And Rinko [Kikuchi, who plays silent explosives expert, Bang Bang] is going to be there. I actually haven’t seen her since the shoot, so I’m really excited to see Ms. Kikuchi again.”

Opening in theaters May 15, The Brothers Bloom has already
played a few other festivals including Toronto and Austin’s Fantastic
Fest. As to how he keeps the experience of screening his movie fresh,
said Johnson, “Every time we do a festival, it’s in a new city, so it’s
a new crowd. You just have to remind yourself that while you’ve seen
the film a thousand times, the people in the audience haven’t.” He
added, “It gives you a little bit of stage fright — ‘the good fear,’ I
call it.”

Although Johnson is looking forward to his time in Dallas, the realities of life as a director mean that he’s not going to get to linger. “I’m there for one day. What I’ve learned to do at the festivals is just ask everyone I meet what they’ve seen that’s good, and I take notes. Luckily, I live in L.A., so most stuff comes through town,” he said. “But it really is like being the waiter at an incredible feast. You get to be in the room briefly, you get to put your plate down at the table, but you don’t get to eat much.”