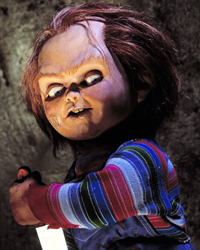 Horror films often turn innocuous objects into instruments of death. Final Destination fashioned an entire franchise out of that gag, and in Child’s Play a voodoo spell turns a talking doll into a killing machine. And don’t even get me started on The Gingerdead Man.

What to make of the cinematic terrors enacted by dummies? Or, to put it another way: how do good puppets go bad? The trend begins in Great Gabbo (1929), which starred Erich von Stroheim as a deranged ventriloquist with a dummy that has a mind of its own. The Dead of Night (1945) mined similar territory, with Michael Redgrave giving a manic performance as a schizophrenic ventriloquist. Devil Doll (1965) had the puppet turning against his master — a tradition that continued in a classic episode of The Twilight Zone aptly named “The Dummy.”

What accounts for our fear of inanimate objects come to life (or automatonophobia, if you want to get technical)?

One explanation is the “uncanny valley” theory. Posited by the Japanese robot builder Masahiro Mori in 1970, it suggests that our repulsion toward anthropomorphic objects increases the closer they come to appearing human. In short, a near human (Frankenstein) is far creepier than an out-and-out nonhuman (King Kong).

But don’t think knowing the cause of this phobia will make Magic, starring Anthony Hopkins as a ventriloquist with a testy wooden friend, any less unnerving.

Click here for a complete schedule of Magic on AMC.