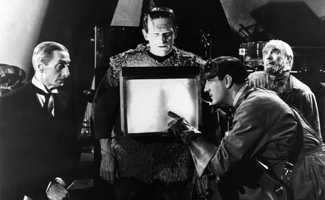 It was as clear as a torch at midnight that the original Frankenstein (1931), an unalloyed success, was going to have a follow-up. But Universal knew it would be difficult to reassemble the creative team that brought the monster to life: sequel-averse director James Whale, imposing-but-mum monster Boris Karloff, and booze hound Colin Clive (Dr. Frankenstein). All of the components were eventually reassembled in Bride of Frankenstein (1935), which many fans rank higher than the original. Time film critic Richard Schickel called it “one of those rare sequels that is infinitely superior to its source.”

But amidst all the praise, one name is often missing: Kenneth Strickfaden, the special-effects wizard who created the scientific devices buzzing maliciously, spouting geysers of electricity, and igniting the Promethean spark that brought Frankenstein’s monster to life. He worked on the first three films in the series.

While Strickfaden’s devices might seem quaint by today’s standards, subsequent filmmakers have relied on his work. For Young Frankenstein , Mel Brooks used Strickfaden’s equipment. George Lucas co-opted Strickfaden’s electric thunderclaps for the sound of clashing lightsabers in Star Wars . James Cameron went begging at Strickfaden’s doorstep to use his clunky but inimitable hardware for the time-travel sequences in Terminator 2 .