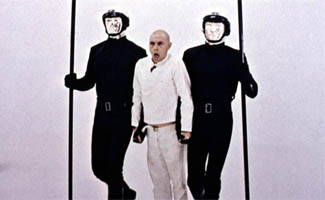 Are you properly sedated? Calling 348-844 to set yourself straight may work in George Lucas’ THX 1138 , but in the real world pharmacological emotion control requires a bit more, well, science. Fortunately there’s good news for those overburdened with emotion: A recent study published in Nature Neuroscience suggests that beta blockers, commonly used to treat heart conditions, can also eliminate those pesky feelings.

Clinical psychologist Merel Kindt and her colleagues ran an experiment at the University of Amsterdam in which 60 men and women were taught to associate pictures of spiders with a mild shock. The next day some participants were given propranolol, a generic beta blocker, and others were given a placebo while the memory was recalled. When the subjects were shown the same images the physiological response was eliminated in the propranolol group, but not in the placebo group. “The people did not forget seeing the photograph of the spider,” Kindt says. “But the fear associated with the image was erased.”

Animal studies have shown in the past that memories can change when recalled, a process known as reconsolidation. This new study suggests that beta blockers can change memories so that they no longer elicit an emotional response. But unlike THX’s underground dystopia, Kindt and her researchers are not trying to maintain social control, rather to help those suffering from a traumatic past. But they admit beta-blockers wouldn’t stop reconsolidation of only frightening memories: “It’s likely that any emotional memory, happy or sad, recalled after taking the drug would be dulled,” says Kindt.

Propranolol could be just the stimulus package to keep workers happy and efficient during these troubled economic times. THX was working without fear or question on a nuclear production line, thankful he had an occupation to fill and orders to “Buy more. Buy more now.” Everything was fine — until he stopped taking his meds, that is.

Before beta blockers can be considered for either intention (treating anxiety disorders or controlling humanity), researchers need to look at how long the drug’s effect on memory lasts and how it works on people who are actually suffering from some kind of disorder or phobia. In the meantime, if you’ve been feeling strangely carefree and you were recently prescribed a beta blocker for your blood pressure, you might want to consider what you choose to think about while you’re obeying your doctor’s orders.