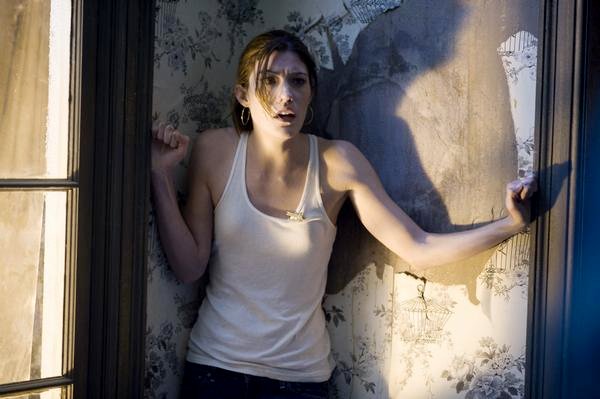 There are a few subjects in life that, when brought up in conversation, can tear a group of people apart; friends can become enemies and besties can become worsties in an instant. Some hot-button topics to avoid: Politics, the extended catalog of Leo Sayer and POV horror. I live for drama, but this column is not the place for politics, and I’ve been down the Leo Sayer road more times than I care to admit. I guess this leaves only the love it or hate it subgenre of POV horror to talk about — and I just happen to be doing it the week that Quarantine is released on DVD.

The “POV” in POV horror simply means “point of view.” It’s a term used to loosely describe those movies that are purportedly filmed by the characters in the movie itself — the characters hold the camera. The intent is to put the audience smack dab in the middle of the proceedings, to blur the line between fact and fiction and make us question the reality of what’s unfolding on-screen, fakery in the guise of realism, if you will. Hallmarks of these movies include nausea-inducing camera shaking and lots of yelling — not to mention that there’s always that one character who gets angry and demands that the cameraperson “Turn it off and stop filming!” But do these films ever work? Here are five to consider:

Quarantine (2008)
This remake had a budget nearly ten times the size of its predecessor, the 2007 Spanish cult hit [REC]. I’m not sure what that denotes, exactly, but it seems worth mentioning. Aside from the wildly divergent budgets, the two films are all but identical twins, and both pack their fair share of scares. The plucky young host of a reality news program and her cameraman tag along when firefighters respond to a routine rescue call in an apartment building. Within minutes, they’re all trapped in the building and under attack from raging zombies. It’s a very simple film, and the confusion and panic that permeate the movie feel very real — the terror is palpable in this one.

Cloverfield (2008)
Producer J.J. Abrams’s Cloverfield is undoubtedly the most ambitious POV horror movie to date; Godzilla-style giant monsters attacking cities flicks are hard enough to pull off — never mind, you know, trying to make it seem real. What works most in Cloverfield is, the sense of unknowing — lower Manhattan is under attack (uh, yeah, shades of 9/11) and the city’s denizens have no idea why or what’s doing the attacking. The movie’s promotional campaign capitalized on this concept perfectly; early trailers showed explosions… but not what was causing them. When the culprit was finally revealed, Cloverfield managed to make the fun and cheesy “big monster whales on buildings” genre scary.

Diary of the Dead (2007)
As to be expected, writer/director George Romero’s foray into POV horror is all about the zombies. Kids making a mummy movie in the woods find themselves in the midst of the zombie holocaust; their every move is recorded as they travel, avoiding the undead hordes in search of safety. It pains me to say that Diary of the Dead is a prime example of POV horror that simply doesn’t work. It’s too slick, too high-budget, and Romero is too good of a director to make this feel like amateurs shot it. You know all that queasy-making camera shaking? It turns out that that’s part of what makes POV horror feel real. Here, Romero’s experience hinders the production; shots are deliberate and pretty; the gore is CGI-enhanced. For good POV, I’d check out any other movie on this list and for good zombie action I’d check out Romero’s earlier efforts.

The Blair Witch Project (1999)
While it may not be the movie that launched the POV subgenre, The Blair Witch Project undeniably brought the technique into the public consciousness. No film has parlayed realism from fakery as well as this simple tale of three college students who go missing during a trip researching the Blair Witch of Burkittsville, Maryland. Opinions diverge wildly on whether BWP is actually scary — people rightly complain that nothing actually happens in the film (to which I counter, you get out of BWP what you put into it) — but what makes it work is the way it was made. The three actors really are the ones doing all the filming; given just a vague outline of the plot, none of them knew what would actually be happening to them when they entered the woods. Their lines are largely improvised, their reactions are largely real; The Blair Witch Project is real fake reality, and there’s not likely to ever be a finer example of shaky-cam horror.

The Last Broadcast (1998)
Preceding Blair Witch by a year, The Last Broadcast is the film furiously mentioned by the righteous when it’s said that BWP invented the POV genre. Obviously, Broadcast influenced its successor: This, too, is the story of three documentary filmmakers who disappear/are murdered in the woods under mysterious circumstances. Just because it came first, however, doesn’t mean it’s better — the minds behind Blair Witch simply improved upon the formula. There’s still enjoyment to be had in The Last Broadcast, but watching it is akin to watching Some Folks Call It a Sling Blade, the 1994 short film that would later be expanded upon (though the title shortened) and transformed into Sling Blade . It’s a blueprint, a rough draft of better things to come.

POV horror is a deceptively simple genre. The concept has — and will continue to — lend itself to countless attempts by filmmakers, amateur and pro alike. All it takes is a character holding a camera, right? Anyone can do that. Right?