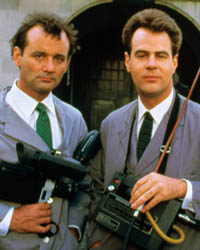 • Spider-Man: The Musical will be swinging into Broadway with music and lyrics by U2‘s Bono and the Edge. Yikes.

• Dan Aykroyd says that Ghostbusters 3 will be in production by late this year. This isn’t the first time he’s made such a promise, but let’s hope the new game will galvanize the situation.

• Alex Proyas’ adaptation of John Christophers’ Tripod novels will, in fact, take in the whole trilogy.

• Eternal Sunshine director Michel Gondry is in talks to direct Seth Rogen’s Green Hornet project, which makes about as much sense as Ang Lee directing Hulk.

• The majesty of the AT-AT imperial walker, made entirely out of old household gadgets.

• If you actually think there’s a point in learning the exact words R2D2 was speaking in The Phantom Menace, then you’ll find this interesting.