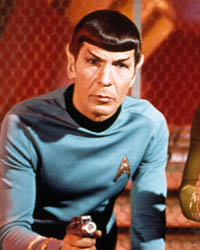 • A fascinating point by a computer scientist: Any military robots will need to be programmed with a warrior’s code or some Asimovian laws, since there’s no way any one AI’s programming could be wholly understood by its programmers.

• Big Finish will be releasing an entire lost season of Doctor Who episodes in audio play form.

• SF Signal lists the 2009 books they’re most looking forward to. Charles Dickens obsessed with a creature named Drood? Sign me up!

• Star Trek is getting its very own line of perfumes, with scents ranging from “Red Shirt” to “Pon Farr.” That means you can either reek of a Vulcan in heat or a security guard killed before the first commercial break.

• Vonda McIntyre talks about her experience writing Star Trek movels in the 1980s.

• Terry Pratchett is a British Knight of the Realm.