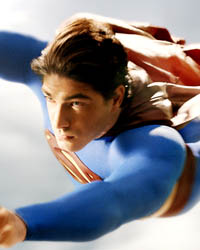 • The occasionally accurate Ain’t It Cool News reports that the Wachowski Brothers may sign on to reboot Superman as a trilogy. Of all the directors, and after Speed Racer no less!

• Christopher Nolan’s next picture for Warner Bros. won’t be a third Batman — it’ll be a scifi action flick called Inception.

• The 11th Doctor, Matthew Smith, has been signed for a three year stint on Doctor Who. More shocking is his pay: An annual salary of £200,000, which doesn’t sound too bad, but still seems paltry for such a seminal character.

• Why don’t we get Godzilla comics like this over here in the States?

• The Day of the Triffids is being remade by the BBC, and the cast looks great.