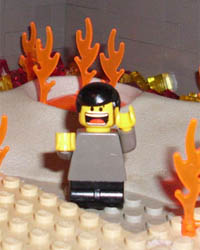 • I’m sorry, Dave: A HAL-9000 app comes to the iPhone. Meanwhile, a Cylon detector app has simultaneously been released.

• The Cartoon Network’s Clone Wars series is the best thing to happen to Star Wars for awhile, which is saying absolutely nothing. Anyways, it’s been renewed for a second season.

• Witness a recreation of the very first Star Trek episode — in LEGOs.

• I’ve been expecting terrible things from the V television reboot, but io9’s got a sneak peek, and it doesn’t sound too bad from a conceptual standpoint.

• NASA is hosting an incredible though fairly low-tech gallery of space colony art from the 1970s.

• Neatorama lists ten things science fiction got wrong. All the usual suspects are here, including laser bolts you can dodge and humanoid aliens with bumpy foreheads.

• SF Signal posts an excellent primer on what to recommend to non-scifi readers.