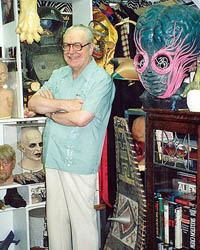 • Battlestar Galactica loves alcohol — and seems to have an endless supply of it. Here are some cocktails to try for yourself.

• Robot Chicken presents Star Trek II: The Wrath of Khan, The Opera. I didn’t think anything could be better than Shat’s “Khaaaannnn!” until I heard it belted in operatic Italian.

• Joblo gets some stills from the upcoming Watchmen animated featurette, Tales of the Black Pirate.

• The late Forrest J. Ackerman’s scifi collection is being auctioned off. No. How could Uncle Forry’s estate let it be dispersed this way? You’re supposed to start a museum with that collection!

• Spout.com lists ten movies that would be better with zombies. You really could add just about any movie to this list, though.