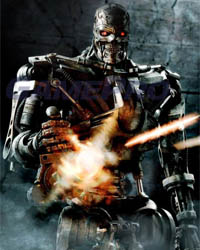 • Slashfilm has a swank new image of the T-600 from McG’s upcoming Terminator Salvation.

• And peaking of Terminator Salvation, Christian Bale went absolutely ballistic on the director of photography on set. F-bombs ahoy!

• The BBC will run a program on Terry Pratchett’s battle with Alzheimer’s tonight, illustrating the scifi author’s advanced brain mapping techniques he hopes will keep the disease at bay and eventually cure him.

• The Apex Book Company explains the difference between steampunk and cyberpunk. Who else is craving the triumphant return of cyberpunk?

• Daily Cognition lists their votes for the top 15 scifi novels.

• Despite the fact that Joss Whedon’s Dollhouse hasn’t yet premiered, Atomic PC feels confident enough about it to go into the science of personality implanting.

• The Boston SciFi Marathon — a 24 hour cinematic extravaganza — is coming February 15. I used to go to this every year in Boston, and it’s a hoot. Consider going if you’re a North-easterner.