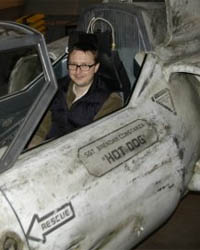 • Look who it is! The Daily Show’s John Hodgman makes an unexpected appearance in this Battlestar Galactica photoset.

• The Super Bowl spot for G.I. Joe makes the movie look waay better than I thought it would be, while the Star Trek one turns out to be pretty sparse on new details.

• Neil Gaiman wants The Brave One director Neil Jordan to helm the adaptation of his Newbery-winning Graveyard Book. And no, it’s not just because his name is Neil, too — though that probably helps.

• Everyone’s favorite Master of the Universe, He-Man, finally gets a director.

• These classic Doctor Who figurines are distressingly rad.