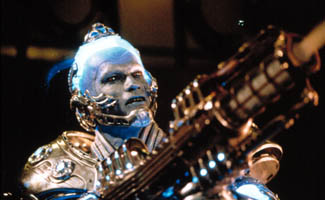 Last week Beijing was blanketed in a beautiful snowfall, which in itself would not be a remarkable piece of news. But this snowstorm was artificially produced. We like to think the power to create a storm is kept safely in the realm of science fiction, used only by supervillains like The Truman Show , reality television producers. In fact, scientists have been seeding clouds to make storms since the 1940s.

There are numerous reasons one would want to control the weather, the obvious one being world domination. Thankfully, since claiming responsibility for the precipitation, the Chinese are not spewing demands (“You will buy your weather from me!”) like Sean Connery did in The Avengers . Nor are they making threats like Schwarzenegger’s Freeze (“Tonight’s forecast: A freeze is coming!”). So why did the country create a snowstorm bad enough to close 12 highways and cover parts of the Great Wall? They’re trying to counter what’s being called the most severe drought to grip northern China in nearly half a century.

According to the Beijing Weather Modification Command Center, city officials seeded clouds above the capital with more than 500 cigarette-sized sticks of snow-making silver iodide launched from 28 rocket bases around the city, followed by another volley of 313 more sticks to “enhance” the storm and make the snow heavier.

It works because clouds need ice crystals to turn into precipitation. “If droplets fall in liquid form they generally evaporate,” cloud seeding expert Arlen Huggins told Scientific American. “The idea is to add ice-forming particles.” That’s where the silver iodide comes in: It’s lattice structure is very close to that of ice, which is why scientists say water will bond to it, helping clouds to create snow or rain. As Batman’s villain would say, “Ice to see you!”

Residents don’t seem troubled by their chemically induced winter wonderland. In fact, the storm turned into the perfect photo-op with many citizens took time off work to enjoy their altered reality. “The snow has brought moisture to the soil and that may end the drought,” said Guo Yingchun, a senior engineer with the Hebie provincial meteorological observatory.

As Christof (Ed Harris), the mastermind controlling the weather in The Truman Show explains, “We accept the reality of the world with which we are presented.” Whether that’s a rain shower that seems to follow around only Jim Carrey, or an artificial tundra, the statement is holding true. The real question is whether the planned precipitation can stop the drought. Huggins doesn’t think so: “The best time to do cloud seeding is when you have normal levels, or higher-than-normal levels, of precipitation,” he says. “Then you could save the extra water in a reservoir for when you are in a drought. It certainly won’t bring you out of one.”

Whether or not the snowstorm becomes the solution to China’s ills, one thing is certain: For Arnold Schwarzenegger, Beijing is the coolest spot on Earth.