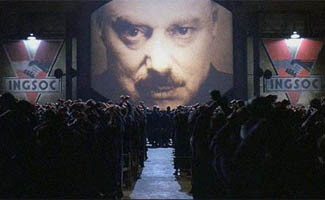 1984 has come and gone, but where is the dystopian future Orwell predicted? Are we yet living under the watchful eye of Big Brother? Not exactly. Technology is no doubt pushing privacy in that direction, but one way reality differs from the classic scifi scenario is that it’s not the government that’s interested in you so much as it is the corporations, who are devising ever sneakier methods of surveillance to reach their target consumer. We’re not just talking about Google tracking your interests online; if you’re watching a digital advertisement these days, there’s a growing chance that it’s watching you too.

Akin to telescreens, new “two-way” advertisements can catch you at the mall, at a health club and even while you’re walking down the street. Small cameras embedded in public video screens display an ad, and when you look at it the system captures an image and uses face tracking software to analyze it instantly. Once your visage is pinpointed, the details are then transmitted to a central database for analysis. Fortunately for you, the companies are only interested in finding out your age and gender and won’t kill you for not buying their product.

The data gathering start-ups involved are quick to point out that they’re not storing actual images and no identifying information is associated with the images. “Everything we do is completely anonymous,” says Paolo Prandoni, the founder and chief scientific officer of Quividi, a French company in the audience measurement business. For now, the goal is to determine the person’s demographic using age and gender and to tailor the display accordingly. Men, for example would get to hear about razors while teens would get to find out about video games. They’re not yet using race as a parameter, but they say they plan to do so.

“This is proactive merchandising,” explains Vick Rabenou of TruMedia Technologies Inc., another leader in developing the technology. “You’re targeting people with smart ads.”

The new age ad-men say they just want to help you become a better consumer, to help you decide what you really need to buy. You’ll hardly be forced to live the thoughtless life of 1984‘s Winston Smith (John Hurt). TruMedia’s slogan is “Every Face Counts,” and as long as you have money in today’s world, you’ll never have to worry that you’ll be asked to unexist — unless of course a company decides to hand over your personal information to the government for a purpose that doesn’t involve stimulating the economy. But that would never happen, right?