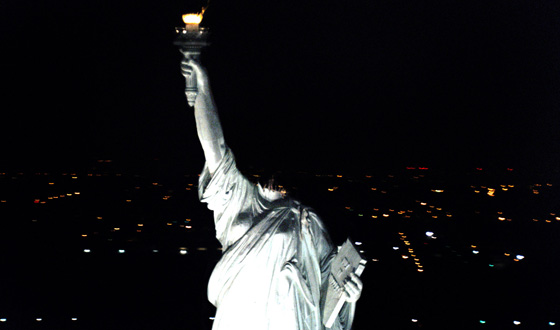 Word of their project first surfaced in July with little more than an announcement that it was happening and that Whedon and Goddard were both involved. The duo wouldn’t even reveal the plot — Goddard teased in an interview with MTV, “It’s got a harder and darker edge, but it’s also got classic Whedon qualities. It’ll rip your heart out and be heartfelt at the same time.” MGM exec Mary Parent who greenlit the movie told The Hollywood Reporter, “I’ll be shot [if I say anything] … It’s an intense visceral thrill ride and I’ll leave it at that.” Whedon’s only comment was “it’s the horror movie to end all horror movies… literally,” a quote that still has fans buzzing over at fan site Whedonesque: “I’m curious about what is implied by the description … Many people misuse ‘literally’ so that it means nothing in particular. But Joss uses language carefully. That ‘literally’ suggests some sort of interesting deconstruction of the genre.”

The ambiguity didn’t stop the fans from talking — if anything, it just stoked things up. The major horror sites speculated as to what could be going on, Whedonesque and other fan sites devoted to Whedon’s works — like this one for Dollhouse — started talking it up. And even though only the title had been confirmed, the movie got its own fansite, Its Own Sub-Genre (from another quote in Goddard’s MTV interview), scanning the trades and every inside source possible for scraps of news. But no solid news would come until late January when casting was announced.

So who would be the face of the film? Would you believe the dead father from Six Feet Under (Richard Jenkins) and cabinet member from The West Wing (Bradley Whitford)? Was this a sign that Whedon and Goddard are staying away from the usual teen-horror cast? Or were they playing a bit of bait and switch, announcing supporting players first to keep people guessing about the leads? “It’s really just your basic typecasting,” said Goddard, “when you need two actors to run through the woods in low-cut nighties, you immediately think of Richard Jenkins and Bradley Whitford.” While nobody was quite sure where they were going with this, hardcore horror fans were certainly intrigued. Over at Bloody Disgusting commenter GreekThunder said, “This will, as everyone knows, be an excellent film as long as the studios keep out of it and let the two on their own.”

As Whedon and Goddard well know, you can only keep people talking for so long without something to talk about. The question is whether that something needs to be true or not. Case in point: On January 24, based on information culled from inside-the-industry casting calls and databases, the New York Times announced the addition of Bill Nighy and Jena Malone to the cast while also giving the following synopsis: “A group of five college kids are tricked into spending a weekend at a cabin where they will be sacrificed to appease the Gods and save the world.”

In retrospect, a cast of middle-aged men in a film supposedly about ‘five college kids’ should have tipped people off that something weird was going on, but it didn’t. Instead, fans fixated on what was meant by “Gods”? Could this be some sort of Lovecraft reference? But then along came Whedon himself to happily mess with people’s heads. Over on fan board Whedonesque, the man himself turned up a few hours after this “news” broke to say, “This is misinformation. While we are fans of both those actors, neither is attached to the movie. Just FYI. However, they ARE attached to the Serenity sequel.” No, there isn’t going to be a sequel to Serenity. But what’s up with the fake info? Whedon elaborated a little later:  “Also, they got the plot wrong. In order to protect the story from spoilerization, we’ve been sending out our OWN misinformation, including fake sides for the actors, fake summaries, different names… So there’s gonna be a lot of ‘information’ leaked that will lead to excited speculation about things you will not see. Sorry. But here’s some stuff you CAN look forward to, my word on it: 1) A person will have an emotion. 2) Two people speaking, or “dialogue”, may occur. 3) A bunch of different people will play the part of Bob Dylan. Hope that clears everything up. More updates soon!”

And here is the genius of Joss: Rather than fight the flow of information, he has corrupted the sources, throwing anything anybody says about this film from now until release into question. And everybody who ran the fake Times casting announcement and synopsis is now going to have to run a retraction: Whedon just got two headlines for the price of one. More importantly, from this point forward, every single scrap of news about the movie is going to be the subject of immense speculation. Even if leaked information is correct nobody will have total faith in it — hence, it stops being a spoiler. And at the same time absolutely everything will become a talking point. Whedon just turned every one of his fans into publicists. Now the only question is whether the movie itself will live up to the hype created by the scrutiny. And with Whedon and Goddard at the helm, the betting money is that it will.