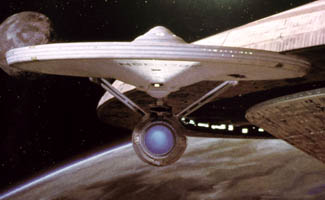 Thanks to a Cornell graduate student, you’ll soon be able to receive Star Trek style medical treatments without the hassle of beaming to the final frontier. George K. Lewis, a third-year PhD student in biomedical engineering, has created a pocket-sized, therapeutic ultrasound device that can not only create images to make a diagnosis, but can also treat serious injuries using only sound waves. If this sounds familiar, it’s because you’ve seen Dr. McCoy carrying around such devices in the Star Trek series and movies, waving them over lifeless bodies right before either magically reviving them or uttering, “He’s dead, Jim.”

Take Star Trek IV: The Voyage Home , where the crew travels back in time to 1986. Through the course of their mission Chekov is injured, prompting McCoy to beg Captain Kirk not to leave him in the hands of “twentieth century medicine.” Good thing, too: Whereas the hospital doctors were going to drill a hole in Chekov’s head, McCoy quickly and accurately diagnoses his wound using a Tricorder and painlessly cures him by placing a small medical device on his forehead.

Yes, drilling holes sounds a bit barbaric. But Lewis’s work means we can some day leave behind the medical “medievalism” Bones encountered altogether. We were already on our way before this breakthrough — in 2007 researchers published the first experiment using ultrasound to seal punctured lungs. This powerful device, built for just $100, will open whole new avenues of possibilities. “New research and applications are going to spin out,” Lewis says, thanks to the fact that “these systems will be so affordable and portable in nature.”

As it is, Cornell says the higher-energy ultrasound that Lewis works with can treat prostate tumors or kidney stones, stabilize a gunshot wound, relieve arthritis pressure and help treat brain cancer by pushing drugs quickly through the brain following surgery. Could it heal a man’s head wound in a matter of minutes like McCoy’s model did in The Voyage Home? Why not?

“People are realizing that when harnessed appropriately, you can use ultrasound to treat things as opposed to just diagnose them,” says Dr. Peter Henderson, the chief research fellow at Weill Cornell’s Laboratory for Bioregenerative Medicine and Surgery. The lab is using one of the devices in experiments that aim to minimize the injury that occurs when tissues do not receive adequate blood flow. “It’s a wide-open field right now, and George’s device is going to play a huge role in catalyzing the discovery of new and better therapeutic applications.”

Lewis suggests that the device could even have applications on the battlefield, where military medics could use it to cauterize bleeding wounds. So if McCoy brings the Klingons along on his next time-traveling adventure, we’ll be ready to fight. Now all we need to do is figure out what was in the pill McCoy gave the woman at the hospital to make her grow a new kidney, and we’ll be ready to explore strange new worlds.