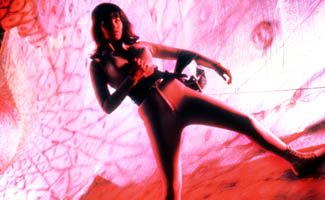 The remake of 1966’s Fantastic Voyage has been in development hell for so long that by the time it’s made, doctors may actually be using miniature submarines to save their patients’ lives. Earlier this month, Australian scientists announced a breakthrough in miniaturization that they believe will allow doctors to go where the shrunken sub Proteus and it’s crew went in the campy scifi classic.

The scientists, who reported their work in the Journal of Micromechanics and Microengineering, invented a motor small enough to be injected into the human bloodstream. At a quarter of a millimeter (about twice the size of a human hair) it’s 70 percent smaller than previous designs. They accomplished this feat not by shrinking the atoms of a large motor, but by building a microscopic one using piezoelectric materials, which expand and contract when voltage is applied to them. (Watch how it works here.)

Like the movie remake, this achievement is long overdue. “If you pick up an electronics catalogue, you’ll find all sorts of sensors, LEDs, memory chips etc that represent the latest in technology and miniaturisation,” says James Friend, the lead researcher on the project. “Take a look however at the motors, and there are few changes from the motors available in the 1950s.”

He and his team believe the wirelessly controlled microbot — nicknamed Proteus, naturally — could be equipped to transmit images back to surgeons and even carry out surgeries itself. (A miniaturized technician that looks like Raquel Welch, however, will unfortunately not be inside your vein breaking up a blood clot.) Doctors already perform minimally invasive surgery by inserting catheters in body caveties and arteries, but this vessel is superior because it can go to more sensitive areas like the brain.

“We have a neurologist on the team who deals with stroke patients,” says Friend. “One of our hopes would be that these microbots can increase his [surgical] success rate by allowing him to act more quickly and with greater precision.” After Proteus completes its mission, it can be retrieved using a syringe at the point of entry. Should it break down (or a saboteur like Dr. Michaels causes it to malfunction), it can also be picked up by micro-catheter.

Could this advancement make director Roland Emmerich’s remake obsolete? Perhaps. The researchers have already tested Proteus in human blood and artificial arteries, and will begin to test in pigs — whose arteries and brains are similar to humans — later this year. If all goes well, they’ll proceed to full-scale human trials, at which point Emmerich will have to explain why the CIA isn’t using it to save his fictional super-scientist. After all, why send in a miniaturized crew (and risk them prematurely reverting back to normal size) when you can launch a Proteus microbot instead?