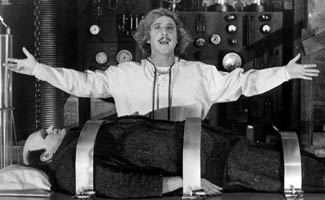 When Dr. Frankenstein’s grandson showed up in Young Frankenstein it was funny. That’s because the movie was set in Transylvania, where evil creatures are bound to hang out. If he had moved into your neighborhood and started making a monster, however, you might have been a bit more concerned. It’s one thing to watch a mad scientist in a movie; it’s quite another to have him living next door. That’s why I find the news that a growing number of “citizen scientists” are experimenting with genetic engineering at home to be somewhat unnerving.

According to the Associated Press, what was once the work of PhDs at universities and corporate laboratories is fast becoming a hobby for anyone with an Internet connection and a little ambition. Amateurs are gathering scientific information online, turning their homes into laboratories and fooling around with DNA.

Take Meredith L. Patterson: She’s a computer programmer by day and a mad scientist making genetically altered yogurt bacteria by night. Her dining room lab includes a gel electrophoresis chamber (DNA analyzer) that she made herself for $25 and some jellyfish DNA that came from a biological supply company for less than $100. It’s a step up from sending Igor to the graveyard for supplies, but mistakes could still be made.

Self-proclaimed “biohackers” say the future Bill Gates of biotech could be developing a cure for cancer in his or her garage. To them I say, “Have you seen The Fly ?” In the 1958 movie the scientist was working from home as well — that is until he was flying around the backyard as a bug, screaming “Help me. Help me!”

If there’s one thing science fiction tells us, it’s that scientists shouldn’t
work alone, especially those in the biotech field. Remember what
happened when Dr. Moreau had his own island? You can blame Val Kilmer for the fact that the 1996 movie is nigh unwatchable, but it’s Marlon Brando’s fault that his so-called “children” are such abominations. Perhaps a little oversight wouldn’t be a bad thing.

Jim Thomas of the biotechnology watchdog organization ETC Group apparently agrees: “Once you move to people working in their garage or other informal location,” he says, “there’s no safety process in place.”

Mackenzie Cowell, co-founder of DIYbio (a community lab in Cambridge, Mass.), argues that the unfettered creativity could produce important discoveries. For his part he’s pursuing new vaccines as well as glow-in-the-dark tattoos using squid genes, which I’m sure is only a few steps removed from re-animating the dead.

What do you think? Have I just been watching too many movies, or will mutants soon be running all over the state of Massachusetts?