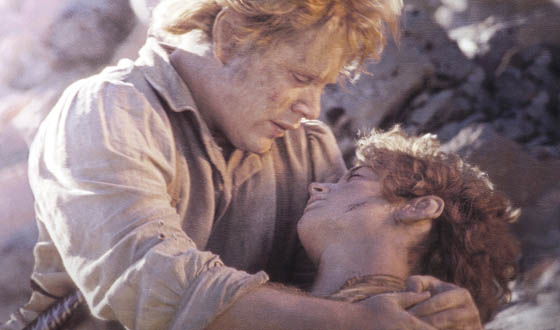 Welcome to the New Year! Around this time, people are probably going to start asking you, “What’s your resolution?” Personally, I always have trouble coming up with a good one, and by that, I mean one I’ll actually keep. A couple of years ago it was, “No dirty dishes in the sink,” which isn’t glamorous but does get the dishes done. This year I decided to turn to fantasy movies for inspiration. After all, much of fantasy is driven by oaths, promises and wishes which, let’s face it, are at the core of resolutions. Here are a sampling of fantasy flicks and the resolutions they might inspire.

Labyrinth (1986)
This movie is chock full of promises and wishes. We start off with Sarah Williams (Jennifer Connelly), who has neglected her promise to baby-sit her half-brother Toby while she tries to memorize lines from her favorite book. Resentful at having to stay with him, she declares, “I wish the goblins would come and take you away…right now.” Surprise! They totally do. But she’s given an out — the Goblin King (David Bowie) promises that she can have Toby back if she solves the Labyrinth in thirteen hours. It’s a seemingly impossible task, but by focusing on Toby, Sarah is able overcome the obstacles and make good on her initial promise — as well as force the Goblin King to keep his.
Resolution: Spend more time with family.

The Princess Bride (1987)
How many times in the movie does Buttercup (Robin Wright) declare that “My Wesley will come for me” as a solution to whatever problem faces her? Something close to a bajillion. Now, I might have liked for Buttercup to solve a few problems on her own, but you have to admire her faith in Wesley’s (Cary Elwes) promise to always be there for her. And to his credit, he keeps it time and again. Granted, he usually arrives at the last possible moment, either drugged on life-giving pills or having recently drugged lispy Sicilians, but he’s there nonetheless. Without that promise, Buttercup would probably have married Humperdinck and killed herself. And that’s just not a pleasant tale to hear on a sick day.
Resolution: There are two really. Have more faith, and be more reliable.

Orlando (1992)
Based on the book by Virginia Woolfe, this audacious movie spans the life of Orlando (Tilda Swinton), a young fop in the court of the original Queen Elizabeth (Quentin Crisp). The queen commands the handsome young man, “Do not fade, do not wither, do not grow old.” Orlando takes that command quite literally and lives on for hundreds of years. The queen, however, says nothing about maintaining a gender identity, so Orlando swings back and forth between man and woman throughout the centuries. Through it all, however, he manages to keep his word, learning about life and love along the way (you’d pretty much have to if you started out a young nobleman and ended a mother to a 20th century child). If only living forever were that easy.

Resolution: Only make promises you can keep.

The Lord of the Rings (2001)
The over-arching promise in this trilogy is Frodo’s pledge to destroy the ring at Mount Doom. Now, Hobbits are small and naturally hermetic. So for one of them to leave the Shire is a big deal, let alone to travel across Middle Earth battling orcs, wraiths and dark wizards. But Frodo and his fellow Hobbits succeed, each becoming stronger and wiser for it — Pippin becomes a Knight, Samwise gets the girl, and Frodo sails off into the great unknown.
Resolution: Travel more.

Aquamarine (2006)
Claire (Emma Roberts) and Hailey (Joanna ‘JoJo’ Levesque) are, like, total BFFs about to be separated because Hailey and her mom are moving to Australia. Teenage tradgedy! Fortunately, there’s a mermaid (Sara Paxton) in their swimming pool, who promises a wish if they will help her find the meaning of love. The girls leap into action, planning to use the wish to keep Hailey from moving. Through their efforts, the mermaid realizes that the girls’ friendship is the best demonstration of love, and grants their wish. But they use it to make a different promise: That the three will see each other every summer.

Now you might ask which resolution I settled on for myself. I decided to opt for the one expressed in 2006’s Stranger than Fiction. If you recall, it’s about a novelist on a deadline (the promise) who discovers that her manuscript is affecting the life (and death) of a real man. And what’s my resolution? Finish the novel, no matter what.