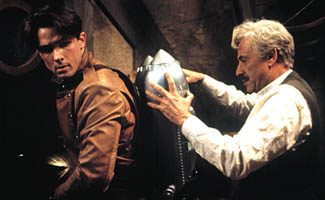 Bill Campbell might have played The Rocketeer in the 1991 Disney movie, but Yves Rossy is the rocketeer to watch this year. The Swiss pilot used a “jetpack” to fly over the Swiss Alps and the English Channel in 2008, and now he’s planning to perform aerobatics at the Grand Canyon. He might not be fighting Nazis or saving Jennifer Connelly, but it promises to be an awesome show.

“I’m just a normal man who has realized his dream to fly a little bit like a bird,” he told reporters after his 22 mile flight from Calais to Dover. It’s a bit of an understatement: He crossed the channel in under 10 minutes, traveling around 134 mph with jets burning a few inches from his legs. He might be flying like a bird, but his love of aviation goes beyond the norm.

Even more impressive is the fact that, unlike stunt pilot Cliff Secord in the movie, he didn’t stumble onto a working jetpack of someone else’s creation. Rossy has been building his device for over a decade using his own money, enough that he says he could have bought a nice sports car every year. The result is more of a jet-wing spanning 8-foot-2-inches that weighs 121 pounds fully fueled and is powered by four turbines — modified versions of units used in model airplanes.

While his wing keeps him from looking exactly like The Rocketeer, its success has put him light-years ahead of other real stuntrepenuers flying through the sky — the Martin Jetpack, for instance, might work for those who want to be like James Bond, but it can’t reach the speed and height of Rossy’s creation.

There is one problem: Rossy hasn’t yet managed to take off without jumping out of a plane, and he can’t land without a parachute. (Nobody’s perfect.) Thankfully, sponsorship from the Swiss watch company Hublot is giving him a boost. He’s taken on the name Fusionman to coincide with their marketing, and is working on launching straight up from the ground. Sounds like he’s on his way to becoming a real aviation superhero. Perhaps a helmet that looks like a hood ornament will help.

Will this story have a Hollywood ending? Stay tuned for more Adventures of Fusionman.