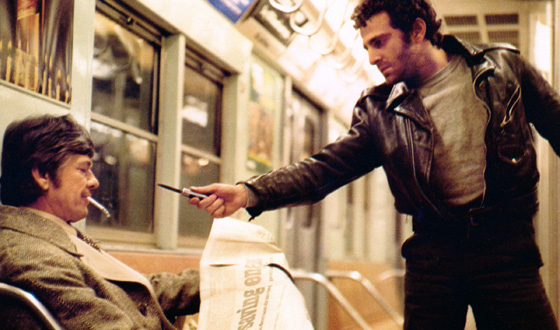 The Death Wish
movies are the only film series that you feel should be wrapped up in
brown paper, like pornography, because their unsavory
ultra-conservatism, racism, sexism, and general seediness contaminates
the touch. But they’re also the ultimate geriatric war cry, moving
politically from a middle-aged middle class revenge fantasy against the
dirty ethnic types who were bringing down property values, to a roar of
disgust aimed at all young people everywhere. Thirty-five years
after the release of the first, here’s how our hero, Paul Kersey
(Charles Bronson) and the world around him changed with each release.

Death Wish (1974) – We all know the story: Paul Kersey’s wife and daughter have been
attacked by three creeps who follow them home from the grocery store.
With his wife dead, his daughter catatonic, Kersey is left with no one
to talk to save his blubbering, spineless, thick-featured son-in-law.
The cops can’t do anything, but when a cowboy client gives Kersey a
“thank you” gift of some pistols… he gets an idea. Kersey was
a conscientious objector in the Korean War but when he picks up his
pistols, he strides out into New York City
and begins to kill muggers. By movie’s end, Kersey isn’t a superman, just a scared, meek fellow with
a big, bad gun and a sickness inside his head.

Death Wish 2 (1982) – Older, less mobile, and with
stiffer knees, Kersey is surprisingly painted as an ace super-combatant
and the only sane man in a world gone mad, a far cry from his
semi-demented revenge junkie in the first movie. When Death Wish came out no one was quite sure what kind of movie they were making: Walking Tall or Falling Down ? The roar of populist acclaim that greeted Death Wish
drowned out any doubts
the filmmakers had about whose side they were on: From here on in,
Kersey was an unqualified hero. In Death Wish 2, the cops don’t chase him down to arrest him as they did in Death Wish,
but to give him a high five. The final shots are an attempt to turn him
into a legendary hero, a man who validates and ennobles
middle-class rage.

Death Wish 3 (1985) – Arriving in Manhattan, Kersey winds up
in a mythical, fairy tale ghetto full of punks who’ve killed one of his
best friends from the Army (the character’s conscientious
objector history aside)
and it’s up to him to take them down. The gang members are young,
athletic, insolent and their biggest crime is that they don’t respect
the elderly. Their victims are a building full of old people, Holocaust
survivors and WW II vets. With the villains all under 50 and the heroes of
the movie in their 60s and 70s, it’s like watching a gang of
Florida retirees take on the world. The message? Kersey is
righteous, old people who served in WW II are heroes, young people who
don’t respect their sacrifices deserve to die, and rocket launchers can
be bought through the mail.

Death Wish 4: The Crackdown
(1987) – At this point, the series was suffering from rigor mortis.
Even when Bronson returned to prove that crack gets you whacked in
he looked like he should be in slippers rather than hard soled shoes.
Again, it’s age versus youth, with age pulling an M-16 out of its
refrigerator like yesterday’s leftover roast beef to blow youth away.

Death Wish 5: The Face of Death (1994) – Death Wish 5 would be Bronson’s last starring role before
he passed away, and the producers make a nod to the fact that their
seventy-three-year-old star was a bit long in the tooth to be taking on
the mob. Like a granddad with his walker, this flick sees Bronson rely
on devices like exploding soccer balls, factory machinery and pools of
acid to show the bad guys what’s what.

As if he took a vow, after the first Death Wish, Bronson never moved his face again. By Death Wish 3
it looked like he was wearing an elephant skin mask with a mustache
glued on, the same expression cut and pasted on his mug in
every scene. And in a way, this is a fitting tribute to the theme of
the series: Youth is bad, change is bad, even changing your expression
is bad. According to Death Wish, everyone and everything is bad — except old people and guns.

For a full schedule of the Death Wish movies on AMC, click here.