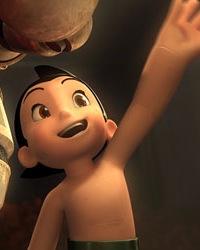 • Don’t count Astro Boy out just yet. Because of financial problems, the studio making the flick is shutting down production for a week, but expects to release the movie on schedule.

• If IESB’s script write-up of McG’s 20,000 Leagues Under The Sea remake is anything to go by, the movie is not going to be at all faithful to Verne’s novel.

• Got a few G-notes to spend? You could pretty much buy up the whole flight deck of the Battlestar Galactica.