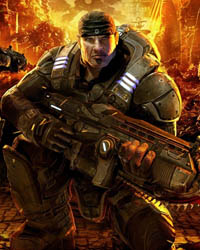 • The writer of the upcoming Gears of War movie says he wants it to be a trilogy akin to The Lord of the Rings, only darker. He’s apparently never played the games.

• V is coming back, but its premise of a Homeland Security agent whose aimless son becomes enamored with the arriving aliens sounds like a ripoff of The Day the Earth Stood Still remake. Very anti-epic.

• And hey, Red Dwarf is coming back too as a two-part Easter weekend special, reuniting all the old cast as they finally make it to Earth. Who wants to bet it’ll be a wasteland populated by Cylons?

• Majel Barrett’s ashes will be mixed in an urn with her husband Gene Roddenberry’s and launched where no man has gone before.

• What a strange pitch: Warner Bros. will be retelling the tale of Samson and Delilah — but it will take place in the future.