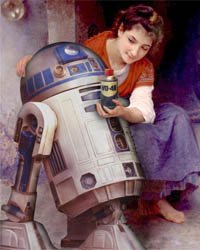 • Following the departure of Stephen Chow from the project, it looks like Seth Rogen’s Green Hornet movie is canceled. This one looked too tongue-in-cheek to be worthwhile, anyways.

• The U.S. occupies the USSR in the retrofuture of yesterday’s tomorrow. Confusing, I know. Just follow the link and all will be clear.

• Pixar’s Andrew Stanton cleared up a few details about his upcoming John Carter of Mars project: It’ll be realistic, two-dimensional and loyal to Burroughs’ character as a Confederate soldier. Right on!

• Worth1000.com is holding an awesome Photoshop contest: Star Wars in the Renaissance.

• What a fantastic idea: A posthumous edit of Jane Austen’s Pride and Prejudice will include zombie ultra-violence.

• The Guardian‘s list of the top 149 scifi and fantasy novels is fodder for much debate, but there’s no doubt that almost everything on it deserves to be read.

• Artist Dusty Abell paints us this breathtaking panoramic argument for the awesomeness of ’70s science fiction.