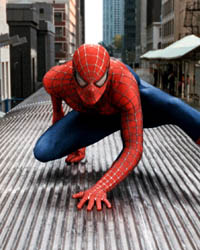 • According to J.K. Simmons, the start of production for Spider-man 4 is imminent, even though the other stars have yet to be cast.

• The lead for the execrable Bionic Woman might just be the next Doctor Who companion.

• Lost in Space‘s Robot is dead. It’s depressing to know that his real name was Bob May only after his death.

• io9 marks Martin Luther King, Jr.’s birthday (and the Obama inauguration) with a compendium of his references in scifi.

• Why won’t Doctor Who film in Dubai? Mostly because of strange Middle Eastern prejudice.

• Yet another new Watchmen featurette: This time, it’s all about The Minutemen.