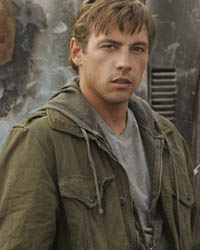 • Not much of a surprise here, but Vision of the Future poll of movies to preserve for future generations .

• George Takei looks set to be the only Star Trek actor to ever cross over into Star Wars as well. Let the healing begin.

• Hideous news, folks: Keanu Reeves is confirmed to play Spike in an adaptation of Cowboy Bebop.

• Topless Robot lists seven shows that deserved better endings. Angel is listed, but I actually think they did as good a job as could be expected.

• Warner Bros. launches yet another Watchmen site, this time dedicated to the fake ultra-conservative news faucet The New Frontiersmen.