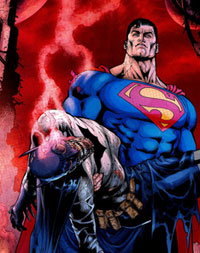 • The Batman R.I.P. storyline ended without really killing Batman at all, which seemed like a bit of a gyp. But resolution is at hand: He’s “really” dying in Final Crisis.

• Ricardo Montalban, best known to genre fans as Khan from Star Trek, has died at 88. Any man who could wear pearls and a tutu and still maintain his swarthy Latin dignity is worthy of being missed.

• Oh No: Will Smith as Captain Nemo in McG’s 20,000 Leagues Under the Sea? No. No. Captain Nemo is Indian, end of story. Why must you ruin my illusions!

• Rumor has it that NASA will be proclaiming life on Mars soon. But before you go building a bomb shelter, note that it’s just a few microbes — not a genocidal Tripod.

• Today is a good day to type with the Klingon keyboard!

• Biology in Science Fiction asks scientists about the relationship between science and scifi. Good news fanboys, there’s a strong one.

• Five things you always wanted to know about the Star Wars Holiday Special. Let’s start with, “What were they on?”