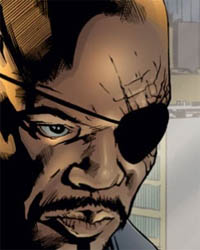 • Patrick McGoohan, star and creator of the cult scifi series The Prisoner (which is currently available for streaming on AMCtv.com) has died at the age of 80. “Who is Number One?” “You are, Number Six.”

• Well, never count your chickens. Film producer Michael Uslan says the Captain Marvel movie might not be dead after all.

• Meanwhile, Samuel L. Jackson says Marvel might not have the money to rehire him as Nick Fury.