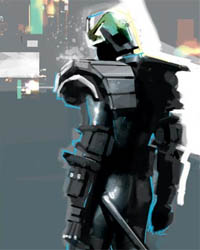 • From Randy ‘The Ram’ to the Crimson Dynamo? Variety reports that recently resurrected superstar Mickey Rourke is in talks for Iron Man 2.

• Chris Pine and Zachary Quinto tell the Wall Street Journal their interpretations of Kirk and Spock are going to piss some fans off. Way to sell the movie, guys!

• Neil Gaiman gets honked off at io9 for publishing false rumors about him writing a Doctor Who episode.

• Trekmovie.com gives us a sneak peek at Kirk’s communicator, McCoy’s tricorder and Uhura’s communication earpiece from the new movie. Cha-ching!

• Mark Waid talks about why there are so few Supermen of color: “In the Golden Age of Science Fiction, one world always equaled one culture, maybe two if they were at war because the plot demanded it.”

• One of my favorite Invisible Man novels, Fade by Richard Kelly, has been optioned for a movie.