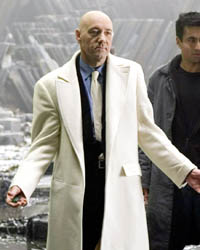 • Tim Roth is apparently locked in and eager for more Incredible Hulk movies. True, Abomination doesn’t die in the first movie. But just because something doesn’t die, doesn’t mean we should let it live.

• A Superman movie without Lex Luthor? Heresy, perhaps, but Warner Bros. is apparently hunting down a replacement for the Man of Steel’s favorite bald real estate fiend for its follow-up to Superman Returns . As long as we don’t see a return of Zod, I’ll be happy.

• io9 looks at all of this year’s scifi whose quality may have been affected by last year’s writers’ strike. Terminator Salvation looks as safe as any movie directed by McG can be.

• AMCtv.com has posted all 17 episodes of the 1967 series The Prisoner, available for streaming in full screen glory.

• Neatorama lists 10 scifi books that even non-geeks would love. Unfortunately, the list is clearly written by geeks: Heck, even I don’t like Dune or Stranger in a Strange Land.

• DVICE lists the eight most absurd devices from scifi movies. Big thumbs up for the inclusion of “unobtanium.”

• What exactly is it that makes Battlestar Galactica so frakkin’ cool? Start with the word “frak” and work your way up.