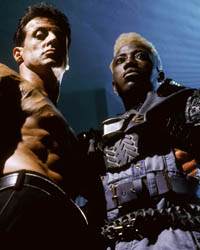 • MySpace has a new feature on Watchmen for your consideration. Soak it in — it may be the only Watchmen content for awhile.

• Because after winning their distribution lawsuit against Warner Bros., Fox is now actively seeking to delay Watchmen‘s release.

• For those of you still trying to wrap your brain around Demolition Man ‘s 3-seashell toilet paper, an explanation has finally surfaced. Gross.

• A fantastic interview between Neil Gaiman and Pádraig Ó Méalóid. Having lived in Ireland for five years, I actually know how to pronounce that name.

• Five new photos from Harry Potter and the Half-Blood Prince have us pretty convinced we’ll be seeing The Deathly Hallows before too long.

• The Comics Reporter interviews Kurt Busiek about his work on the excellent Astro City.

• Fear the return of Elektro, the world’s first celebrity robot.