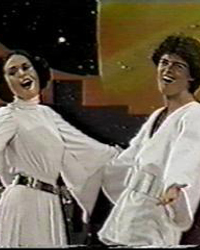 • The video quality is poor, the sound isn’t synced, but Donny and Marie’s campy ’70s take on Star Wars is a must-see.

• Brad Bird almost directed a faithful animated version of Will Eisner’s Spirit comic for Disney. Can we turn on the way-back machine and replace Frank Miller?

• The first five pages of Star Trek Countdown, the official comic book prequel to J.J. Abrams’ reboot, have been released online. The Romulans are back, and this time they have their own slang.

• Guillermo del Toro directing a stop-motion animated adaptation of Roald Dahl’s The Witches is beyond awesome. And the Anjelica Huston version isn’t too shabby either.

• This Nurse Joker action figure is the best Dark Knight toy out there. Unfortunately, it’s a fan-made custom, so you’ll have to shell out a pretty penny.

• What if every major Hollywood actress was actually a Fembot? Well, it would certainly explain Cameron Diaz.

• The Transformers breakdancing in an episode of their old cartoon has got to be one of the strangest, best moments of the ’80s.