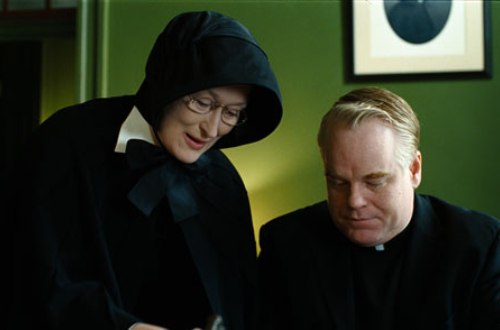 Sometimes one stand out performance — Ben Kingsley in Sexy Beast , or Ashley Judd in Bug — elevate a movie to must-see status. These aren’t perfect movies, but those performances made them can’t-miss movies for anyone interested in the art and craft of acting on the big screen. John Patrick Shanley’s big-screen adaptation of his own award-winning play, Doubt, is the most recent example of a movie transformed by one actor’s work. And although Doubt‘s big-name stars include Meryl Streep, Phillip Seymour Hoffman and Amy Adams, they aren’t who I’m talking about.

Not that Streep, Hoffman and Adams aren’t amazing in Doubt; they are, and you’d frankly expect nothing less. Streep’s Sister Aloysius is one of her greatest roles — a hard-hearted nun who relentlessly pursues the truth behind the friendship between a young student and the parish’s priest. Hoffman’s Father Flynn is affable and gentle, but when accusations and glances turn his way, something seethes up in him, and you can’t tell if it’s fury at being falsely accused… or the fear of being uncovered. Adams’s Sister James is a perfect part for the young actress — Adams has always lent a good-hearted naiveté to her roles. But it’s Viola Davis, who appears in just one scene, who takes the movie beyond being just another high-minded Oscar contender with her riveting demonstration of raw acting power.

Davis plays Mrs. Miller, the mother of the boy Sister Aloysius thinks Father Flynn has taken an improper interest in. You may recognize Davis from Far From Heaven or Solaris or even her recent turn on Law and Order; you may not recognize her at all. But you’ll know who she is after her scene in Doubt. Summoned to the school to talk to Sister Aloysius, Mrs. Miller continues their conversation as she walks to her job cleaning other people’s — white people’s — houses. It’s hard to say too much about Davis’ work in the scene without diluting some of the pleasures of the movie, but during Davis’ scene with Streep, just watch her — as uncertainty becomes understanding, as hope and despair combine into a single emotion that can’t be untangled or put right. Listen as Davis repeats one phrase as a shield, or a club, as a lie or as the truth: “It’s just ’till June.”

Streep and Hoffman and Adams are all excellent in Doubt; Shanley’s done a fine job of bringing his play to the screen; Davis, though, brings something electric to the story, and if anything makes Doubt a must-see, it’s her.

Also Worth Seeing in a Theater Near You:
Gran Torino, Clint Eastwood’s latest movie is also his last — as an actor, at least; the 78-year-old Eastwood has stated this will be his last acting role. The good news is it’s far better than the trailer, where Clint barks “Get off my lawn!” at a group of today’s young people; the bad news is it’s not better by much. Still, the Academy’s going to eat Gran Torino up, unless they remember that they’re supposed to hand out Oscars, not going-away presents.