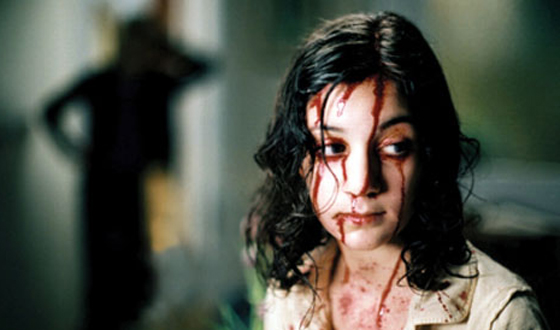 It’s the holiday season and everyone wants to know which horror films are the best of the year so they can get their mom a present. In that spirit, here’s my top ten of foreign horror from 2008. (What mom doesn’t appreciate imported gifts?) Later this month, I’ll rank my favorite American horror releases of the year.

10. Tied for tenth: The Oz-Ploitation Revival Flicks – Spearheaded by the criminally entertaining Aussie film documentary Not Quite Hollywood, Australia has suddenly re-appeared on the exploitation and horror map. Small DVD labels like Synapse are releasing the back catalog of Aussie B-movie gems like Patrick, Thirst and Dark Forces, while new Australian directors are keeping the flame alive with movies like Rogue and Acolytes.
It’s enough to make you want to say, “Peace on Earth, and goodwill to
all giant killer crocodiles, baby-eating dingoes, telekinetic coma
victims and teen-slaying serial killers!”

9. Seeding of a Ghost
– Image’s Shaw Brothers DVDs have all been excellent, and now, just in
time for the holidays, comes this 1983 black magic gut-churner
featuring all the gratuitous nudity, worm-puking, corpse-humping and brain-gnawing you want this time of holiday cheer.
As lumpy and unbalanced as its blood hungry central corpse, let viewers
be warned that the titular seeding is meant to be taken literally, in
the Biblical sense. Ick.

8. The Late Bloomer – Imagine Taxi Driver if Travis Bickle had cerebral palsy and you’ve got Japan’s Late Bloomer. It’s a movie that teaches us all a very special lesson about the handicapped: Deep down they want to stab us in the face. Slathered with
electro-noise by World’s End Girlfriend,
this flick was made in late 2004 but fights with the distributor kept it
out of theaters for four years. That’s too bad because it’s one of
the best movies about living with a disability that I’ve ever seen. Now
it’s finally been unleashed and even Ebert likes it.

7. Vinyan
– What happens when you think your kid died in a tsunami, but then you spot him
in the background of some news footage and decide to go find him in
Burma? Nothing good, according to this loose Belgian remake of the 1976
Spanish masterpiece Who Can Kill a Child? Don’t let the classy French actors in the cast like Emmanuelle Béart scare you off — this thing will hurt you in the brain.

6. Nightmare Detective – Released in 2006 to great acclaim in Japan, Shinya Tsukamoto ( Tetsuo: the Iron Man )
has turned in his most accessible movie to date with this trippy tale
about a depressed shut-in who can travel through dreams, teaming up with
a sexy cop to stop a psychic vampire with cancer. It could have been
the pilot for a 21st century version of The X-Files, but instead it was unceremoniously dumped to DVD in early ’08.

5. Tokyo Gore Police – If David Cronenberg and Sam Raimi collaborated on a screenplay by David Lynch, you would get Tokyo Gore Police,
one of the craziest, (literally) eye-popping, jaw-locking movies
ever made. This “All Hail the New Flesh!” manifesto is ostensibly about
a woman (Eihi Shiina, from Audition )
who polices a future Tokyo, but it’s really about all the ways human
bodies can warp, mutate, grow teeth, turn into snails and, ultimately,
shuck their skin and do the funky chicken.

3. The Chaser
– People will argue that this sleeper hit from Korea isn’t really a
horror movie at all. But this hard-edged thriller
about a disgraced-cop-turned-pimp trying to save one of his hookers
from a serial killer is so
soaked in gore and dread, it earns a place on my list. Chisels get
taken to skulls, hammers get applied to faces, and by the end of the
movie, your soul will feel like a charred plastic ashtray overflowing
with smoked out butts.

2. Let the Right One in – A very close runner-up is this Swedish flick, described as “the Crouching Tiger, Hidden Dragon
of vampire films,” by virtue of the fact that it delivers the genre
thrills but in a way that’s completely accessible to any audience, from
hardcore gorehounds to arthouse cheese eaters. A twelve-year-old kid
has all the normal problems of twelve-year-old kids: Schoolyard
bullies, hormones, divorced parents. His solution comes in the form of
the little girl who moves in next door — turns out she’s an immortal
vampire. Beautifully shot, perfectly acted and tastefully directed,
when’s the last time you really felt like you could show your mom a
movie with this much implied pedophilia and this many decapitations?

1. Martyrs – French horror head-spinner Martyrs
pulls a triple bait-and-switch on audiences. Luring them in with
a slickly executed thriller that’s hip-deep in gore, it turns into a
grueling exercise in torture porn before finally doing a 180 and
transitioning into a metaphysical splatter flick in the last five
minutes. The set-up is bone simple: A young girl is imprisoned and
tortured for years by mysterious individuals before escaping. Now, all
grown up and (barely) anchored by her best friend Anna, she takes
revenge on the family she thinks was responsible for her ordeal. But
that’s just the tip of this blood-soaked iceberg, and by the end of the
movie, the set-up is irrelevant. Love it or hate it no one made a more
powerful or more ambitious horror movie all year in any country.

Anything missing from the list? Tell us below in the comments.