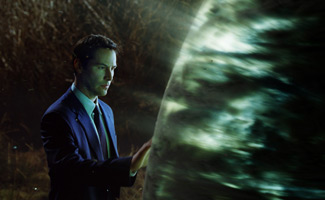 The Day the Earth Stood Still, a movie about making first contact with an alien race, could actually become our first contact with an alien race. 20th Century Fox broadcast its latest flick into deep space on Friday as a publicity stunt, giving it a truly wide release. Now, despite a litany of bad reviews, the movie is on its way to Alpha Centauri.

Granted, this is not the first bit of Americana to make its way out of the Earth’s atmosphere (television and radio signals have been leaking into space for some time now, à la Hitler in Carl Sagan’s says a Fox representative , “they will be able to receive and view the film approximately four years from now in the year 2012.” At which point aliens will be introduced to humans by way of a film Time Magazine described as an “alienating…stream of junk.”

Even if you like the movie, think about the message it’s sending: “Hello. We’re from Earth. You’re going to want to kill us…but wait!” Is that really putting our best foot forward? Why not send Rocky, or, if the movie has to involve aliens, Galaxy Quest ? It’s hilarious and most importantly, the aliens in that movie aren’t looking to exterminate all of us.

The company responsible for transmitting Fox’s calling card, Deep Space Communications Network, advertises 5 minute transmissions for only $299.00. But before you blast off your own short movie, you might want to read “Klaatu barada stinko“, an analysis of the project at The Space Review that suggests the transmission might not actually make it out of our solar system. The private company says it will transmit to “deep space,” which it defines as any point “beyond the highest satellites” — well short of even the Moon. The article also says the private group’s signal strength would “likely be drowned out in background static long before it reaches any other star.”

To be fair to Fox, one man’s stinker is another alien’s potpourri, so perhaps The Day the Earth Stood Still is the perfect movie to bring to an Alpha Centauri audience. We’ll know eight years from now (the time it would take to receive any response) if scientists get a mysterious message that states simply: “Two tentacles up. Send popcorn.”

What movie would you transmit into space? Comment below.