This holiday season children in countless homes across the country are begging for their first pet (Barack Obama, I’m looking at you). Parents, you know the drill — you might have even been through it before, once upon a time. Sure you could go the puppy, kitten, goldfish route. But if you suspect your child is destined for fantastic, heroic things, perhaps you’d rather pick a pet with a little more pizazz. You see, the pets in fantasy films are more than just low-IQ companions; they play a vital role in the lives of the heroes. So if you want your child to survive his or her epic adventure, you might just want to consult this buyer’s guide for fantasy pets.

Dog
Consider Bolt, the hero of the latest offering from Walt Disney. Fiercely loyal and brave, this little white dog (the latest in a long line of canine crime-fighters) may be a little misguided in his understanding of the world, but he keeps his eye on the goal until his master or mistress is safe. Dogs like Bolt are excellent companions for someone willing to match their steadfast devotion, but with the energy to manage their enthusiasm. If you plan to solve a lot of crimes, plan for this puppy.
Pros: Good at crime-fighting; loyal to the end.
Cons: Needs walking.

Cat
Cats tend not to play the role of “pets” in fantasy movies, but rather that of an independent character like Puss In Boots from Shrek 2. Much like your common house cat, Puss In Boots is independent, but capable of devastating bouts of cuteness. The affection of a cat must be earned whether the feline is fantasy or just plain fat. The owner best suited to for such a creature is independent and willing to meet the cat on its own terms. That, and tolerate a fair amount of swashbuckling.
Pros: Controls rodent population; helluva skilled fencer; mixed with bacon, can win owner Internet fame.
Cons: Easily offended; scratches; Antonio Banderas.

Bird
Hedwig, from the Harry Potter movies, provides a perfect example of a winged companion. She can be counted on to deliver messages in the darkest hour, and at the same time is perfectly content to be on her own. If you’re a linked-in person with an intense social network, but perhaps a bit flighty, an owl like Hedwig might be the perfect companion for you.
Pros: Quiet, clean and self-contained; good for sending owl-mail.
Cons: Requires access to local owl network; connectivity may vary depending on service plans available in your area.

Lizard
Yes, I know: Gross. But let us not forget the power of a pet like Fred the Lizard in Nim’s Island. Simple and unassuming creatures, villains often underestimate their capabilities. But a well-placed lizard can scare off the wiliest of criminals, as Fred did for his human pal Nim (Abigail Breslin). Lizards and other such reptiles are the ideal choice for owners who are either reclusive or stranded on an enchanted island.
Pros: A good stealth pet; attractive.
Cons: Not a snuggler; sheds skin. 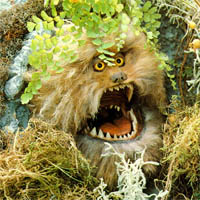 Fizzgig
I’ll be honest, I have no idea what kind of animal Fizzgig is. But this adorable ball of fur from the world of The Dark Crystal is by turns timid and ferocious. With a bristling mouth the size of his entire body, Fizzgig can be a bit off-putting at first, but proves an invaluable asset when you need rescuing from the death rays of Skekis. Consider getting one for yourself if you are the last member of a race and/or predestined to overthrow tyrants.
Pros: Cute; good snuggler; excellent watch-beast.
Cons: Prone to chew on furniture; sheds — a lot.

Dragon
Only for those with the strongest of wills, dragons like Sean Connery’s Draco in Dragonheart are forces of nature in themselves. Less a pet and more a companion, a dragon will introduce daily strength challenges and test your mental wiles. But be forewarned: These handsome creatures are known for their sly wit and trickery.
Pros: Extremely intelligent; easy to housebreak.
Cons: Not recommended for apartment dwellers; fire hazard.

Mogwai
Introduced in Gremlins, mogwai are one of the most cuddly of all pets. These gentle creatures are well-behaved and highly intelligent. Like songbirds, they can be taught to sing, providing hours of entertainment. They do require special care and have a severe allergy to water (which causes them to spawn offspring) and sunlight (which kills them). Also be cautious about feeding them after midnight, as this causes them to become Gremlins: Severely destructive animals akin to a dog with rabies and opposable thumbs.
Pros: Gentle; affectionate; easy to housebreak.
Cons: See aforementioned allergies.

So now that you’ve perused your options, tell me: What pet would you pick?