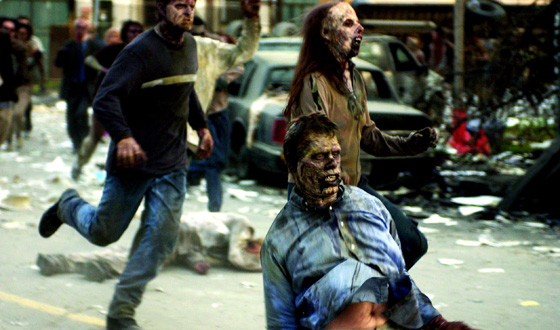 You’re out for a drive, and why not? There’s supposed to be a comet blazing a beautiful arc across the night sky. You’ve got your best guy/girl (or guy-girl) in the seat next to you, and you’re whipping along the road, wheat fields stretching out on either side. But wait, the radio is talking about a viral outbreak. Or maybe it’s bacterial. And didn’t you just drive by that heavily guarded military installation? And just what is all this glowing green fog?

Whatever it is — comet, virus, bacterium, military experiment — you see these shambling shapes roaming across the countryside. Hands reaching out to you. Aww, do they want a hug? Look, champ, this isn’t the Special Olympics — get your ass in gear and head for the nearest farmhouse.

That’s right, the zombies are coming.

Welcome to the latest installment of my “I ‘Ain’t ‘Fraid of No” series, where Uncle Scottie teaches you the many movie methods for taking out monsters. In the first installment, we looked at how to go all Tony Soprano on werewolves. Now, it’s time to see how Hollywood has dealt with that favorite obscenity, the walking dead. Put that couch in front of the door, check your friends for bite marks, and let’s get to work.

Check Out the Big Brains on Brad
Zombies are decomposing, right? Rotting at the bone, fingers falling off, etc. They can crawl with no legs, ignore evisceration, seemingly cowboy through every last iota of actual mechanical cellular biology. And yet, no matter how cavalier they are about physics, nine out of ten screenwriters seem to agree — take out the brain, you take out the zombie. Shotguns, chainsaws, axes, golf clubs and cricket bats are all acceptable weapons. Night of the Living Dead , the original Return of the Living Dead , etc., all demonstrate this tried and true tactic. But if you’re short on ammo and you don’t want to get close, strip a few wires and try…

Electrocution
Always a winning method for dealing
with any foe, it also cuts down on carbon emissions that contribute to
Global Warming. Check out Return of the Living Dead Part II
for a primer on how to stay green while frying large numbers of
zombies. It’s how Al Gore takes out his undead. Of course, it you don’t
know squat about electricity, there is always…

Fire
Stuff burns. Roll with it. They did in Planet Terro r. Sure, your
farmhouse/mall/military base/bombshelter survival team won’t
necessarily include Rose McGowan (which, in itself,
is one hell of a motivation for fighting for life), but any combo of
fire/flamethrower will do just fine. However, be warned that zombies
don’t feel pain, and when on fire they may just keep coming after you
like a predatory s’morish nightmare. This wrinkle is particularly
disconcerting if you are facing…

100-Yard-Dash, Gold-Medal-Winning Zombies
This
is a difficult predicament facing us all. It seems the shambling mounds
of sloth-like undead are becoming extinct, giving way to some serious
speedsters. The Danny Boyle good-time zombie flick 28 Days Later showed that it’s not just about pacing yourself, staying alive means coming out of the blocks like Usain Bolt. Zack Snyder’s Dawn of the Dead remake perpetuated the Carl Lewis theme. Thankfully, the dismal grab-the-fans’-cash-and-split treatment of the sequel 28 Weeks Late r
could spell doom for this mutant sprinting strain. Beyond the danger
they represent to the less speedy among us, these fast-moving cats are
bad, because it makes them seem more “alive,” which can draw the
attention of…

The Zombie-Loving ACLU
Oh, you
haven’t heard about Life-Challenged Americans? Yeah, that’s right,
there are people out there that insist we treat the undead like,
well… like people. Insanity, right? Don’t shoot them in the
head, don’t electrocute them, don’t burn them, etc. You think I’m
making this up? Check out the end of Shaun of the Dead .
Instead of properly dusting his friend-turned-zombie, ol’ Shaun chains
him up and lets him play video games. If you look closely at that
scene, you’ll see a pamphlet in Shaun’s shirt, a pamphlet from the
worldwide nonprofit group Zombie Right to Unlife. How about
that? Human rights for the inhuman is a growing problem, folks, so we
better be ready to deal with it. Wake up, live people!

Additional Reading
If you need more tips, the essential guide to dealing with this scourge is, of course, The Zombie Survival Guide by Max Brooks.

Lessons Learned
Yes,
you have been educated and entertained. In January, we’ll take a look
at yet another member of the undead clan, the vampire, and discuss ways
to slaughter them. Uncle Scottie is a helpful guy that way. Until then —
remember to aim for the head.

Scott Sigler writes tales of hard-science horror, then gives them away as free audiobooks at www.scottsigler.com. His new novel, Contagious,
hits bookstores on December 30 and is currently available for
pre-order. If you don’t agree with what Scott says in this blog, please
email him scott@scottsigler.com. Please include all relevant personal
information, such as your address and what times you are not home, so
Scott can come visit and show you his world famous “Chicken Scissors.”