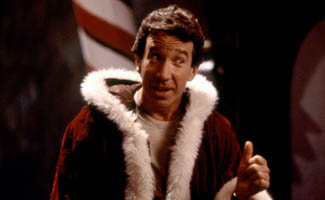 He lives with elves, never dies, can manipulate space and time and knows when people are naughty or nice. If Santa wasn’t real, he’d be the greatest science fiction character of all time. And from 1964’s Santa Claus Conquers the Martians to 1994’s The Santa Clause, he’s been treated as such. But there’s a good deal of cutting-edge science that helps Santa make the holiday happen, without which Tim Allen would just be a guy in a red suit.

Take Santa’s ability to visit some 80 million homes in a single evening: “Children shouldn’t put too much credence in the opinions of those who say it’s not possible,” says Dr. Larry Silverberg of North Carolina State University. “It is possible, and it’s based on plausible science.” Indeed, as Allen is forced to discover first-hand after donning the suit, St. Nick’s ability to travel over approximately 200 million square miles in just a few hours is the result of a time warp. Dr. Silverberg, a professor of mechanical and aerospace engineering, clarifies the concept to so-called relativity clouds: “Santa recognizes that time can be stretched like a rubber band,” he says. “Relativity clouds are controllable domains — rips in time — that allow him months to deliver presents while only a few minutes pass on Earth. The presents are truly delivered in the wink of an eye.”

He can bend space-time, sure. But how does he carry all those presents? The Santa Clause depicts a single bag that carries gifts by opening into a sort of bottomless black hole. But Silverberg says he’s found a better way: Santa utilizes a nano-toymaker to fabricate gifts inside the children’s homes, he theorizes. The presents are grown on the spot — atom by atom — out of snow and soot, much in the same way DNA commands the growth of organic material into tissues and body parts. It’s a lot easier than lugging a black hole around.

Then there’s The List. If you watch Allen closely, you’ll notice that rather than reading “Dear Santa” letters, he automatically intuits the wishes and niceness of children he encounters. The professor theorizes that Santa accomplishes this feat by listening to childrens’ thoughts using a special antenna that combines technologies used in cell phones and EKGs. After all, who needs to make a list and check it twice when thoughts are beamed straight into your noggin?

One area neither Silverberg nor The Santa Clause address is St. Nick’s longevity, but why would they? Everyone knows, as The Life and Adventures of Santa Claus (1985) explains, that his collection of magical elves and reindeer grants him immortality.