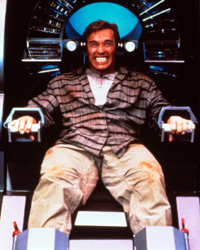 Turns out that taking a virtual vacation, or watching SQUID recordings to “jack in” to other peoples’ experiences is no longer the dreams of science fiction. Strange Days are here at last.

Today’s dream dealers, Neuroscientists at the Karolinska Institute in Stockholm, Sweden, have been testing ways to change the brain’s perception of the physical self. While they can’t yet give volunteers “the memory of a lifetime” like they do in Arnold Schwarzenegger’s Total Recall , they were able to fool volunteers into perceiving other bodies as their own.

The scientists, Valeria Petkova and Henrik Ehrsson, explained how they accomplished the virtual reality in the journal Plos One. Two closed-circuit television cameras (one for each eye) were positioned on the mannequin’s body to record events from its perspective, looking down. At the same time, the images were projected on displays in front of the participants’ corresponding eyes.

“Participants were asked to tilt their heads downwards as if looking down at their bodies,” they wrote. “Thus, the participants saw the mannequin’s body where they expected to see their own.”

It works, in short, because the brain believes the eyes are attached to the skull. To help the illusion along, the experimenters touched the volunteers’ bodies in the same place and at the same time they touched the mannequins. So effective was the out-of-body experience that in 70% to 80% of the swaps, when the mannequin’s belly was threatened with a knife, electrodes on the test subject’s skin showed a physiological stress response.

Impressive, you say, if you want to be a dummy. Point taken. A full body swap also worked, even making women believe they were in a man’s body and vice-versa. In the words of Strange Days‘ Lenny Nero after he helps a man become an 18-year-old girl taking a shower, “Are you beginning to see the possibilities here?”

“This effect is so robust,” write the researchers, “that while experiencing being in another person’s body, a participant can face his or her biological body and shake hands with it without breaking the illusion.” Just imagine how well it would work if the participant was seeing images taken directly from the other person’s cerebral cortex. The spy game would never be the same.

“The
questions is what happens if you did it much longer?” warns Charles Spence, a professor of experimental psychology at the University of Oxford. “If you were in
there for days and weeks. Would it be like something out of Total Recall ?”

With this technology a company like Rekall (the one that messed with Schwarzenegger’s head) could soon be in business. In the meantime, perhaps you could pay a visit to the Karolinska Institute for their next round of testing. As the rep from Rekall says, “Let me suggest that you take a vacation from yourself. I know it sounds wild. It is the latest thing in travel.”