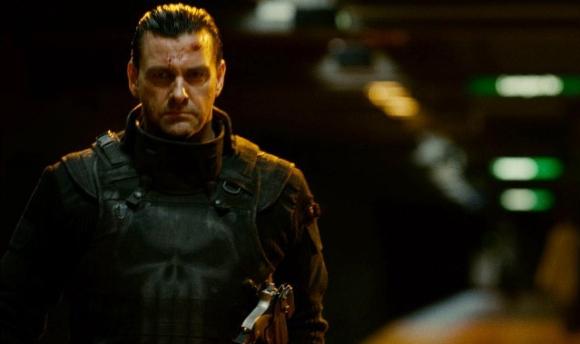 This past month, writer Garth Ennis brought his acclaimed comic book run of The Punisher MAX to a high caliber conclusion (that’s MAX as in “grody to the max” not “Maximilian”). For five years and 60 issues Ennis used Marvel Comics’ monosyllabic vigilante to turn out the best series on the stands. In an interview, Ennis explained the Punisher’s appeal: “He sees the world in very black and white terms,” he said. “You can always rely on him to act a certain way. It’s interesting to move a character like that through the complex situations life throws up.” Now, in a misjudged nod at Ennis’ run, director Lexi Alexander ( Green Street Hooligans ) brings Punisher: War Zone to theaters. Does her movie give us the complex situations that made the Punisher shine in Ennis’ hands?

Hardly. Punisher: War Zone is the kind of bad movie that goes down best with a six pack and some crack. Stitching together a mawkish “tough guy meets cute kid” flick with a lowbrow, mid-90’s action picture and a goopy hardcore gore movie, this Frankenfilm lurches across the screen like a reanimated corpse: No grace, No style, No point. However, watching this monster twitch, jerk and gush gallons of blood is pretty entertaining if you don’t care too much about what you put in your eyes. Any movie featuring a scene where a man nonchalantly sets his broken nose by casually shoving a pencil five inches up one of his nostrils is a twisted piece of work I can get behind — if I’m drunk enough.

Bereft of story, this flick chronicles what seems to be a pretty ordinary day in the life of the Punisher, aka Frank Castle. First up, he kills a mob boss, which seems like a pointless decision because it allows another mob boss to take over. Mob boss #2 is played by Dominic West (McNulty on The Wire, eagerly slumming) who seems to think he’s in Warren Beatty’s Dick Tracy . The Dick Tracy reference becomes literal after his face is fed through a glass recycler and gets stitched back together into an unconvincing rubber mask, causing him to speak in a ridiculous 1920’s gangster accent. Apparently, West just watched a couple of Saw movies, too, because he renames himself Jigsaw before he goes looking for a missing $200,000.

Turns out that one of his minions was appointed Treasury Secretary of his gang, but this guy was actually an undercover FBI agent and before the Punisher accidentally shot him (cue the Punisher looking sad) he hid Jigsaw’s cash. Fortunately (or not) said agent has a wife (Julie Benz) and a little nine-year-old girl who the Punisher falls in love with and vows to protect. Then a lot of people die.

Ray Stevenson (Rome‘s Titus Pullo) plays the Punisher as a middle-aged schlub, trudging through his body counts like a clock puncher at Goldman Sachs or the “Before” guy in a Zoloft commercial. Montreal joylessly stands in for New York City and turns in much the same performance: A grimly depressing background for excessive foreground violence. The only thing that anyone seems to get excited about in this film is the gore, and as such this movie features more insane bloodshed than any American movie of the last ten years.

Knives go through skulls, heads are chopped off, heads explode, heads are shredded, kidneys are pulled out and eaten, legs are shot off at the knee and fly through the air. It’s as if the only thing the filmmakers care about is carnage, which is okay by me. But they sprint so hard at the beginning that by the time you get to the big showdown, all the creative energy is exhausted. Instead of upping the gore, the finale features a truly boring stand-off at gunpoint, the death of a character no one cares about (not even the actor playing him) and zero surprises. But earlier, perhaps when the Punisher is looking deeply into a little girl’s eyes while pushing a chair leg through someone’s skull, this one almost reached the heights of a true, blood-soaked bad movie classic.