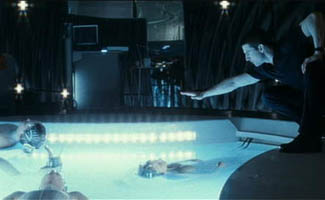 It’s not a crime to meet a friend on a deserted street. But with the new Smart CCTV Perceptrak system, it may be a precrime that will earn you a visit from the police. Are the cameras psychic? Not really, but they are able to “predict” crimes by spotting suspicious behavior. When that happens, they alert an operator who can send police to the location to stop a crime from happening.

Remember the good old days when Minority Report seemed futuristic? Obviously, using closed-circuit cameras hooked to computers isn’t the same as having precogs feeding you the future à la Steven Spielberg’s 2003 thriller, but both take the same approach to law enforcement: You’re innocent until you look guilty. And surprisingly, it’s an attitude that’s catching on. Cities like New York already have the system in place, and in the U.K. Perceptrak is being installed alongside its own “precrime analytical wing.”

Word that the cameras are being tested in the town of Portsmouth is igniting debate over whether or not increased surveillance actually reduces crime. ‘Bringing expensive Hollywood scifi to our car parks will never be as effective as having police on the street leading the fight against crime,” a spokesman for a civil rights campaign group tells the Daily Mail. Councillor Jason Fazackarley of Portsmouth Council disagrees. He calls the system the “21st century equivalent of a nightwatchman,” superior in fact, because “it never blinks, it never takes a break and it never gets bored.”

Smart CCTV Managing director Nick Hewitson is quick to stymie comparisons between the technology and Minority Report, which he says is still a “long way off.” The system can’t differentiate between a guy waiting for his girlfriend and one who’s about to commit a crime, he explains. “That is for the operator to make a subjective human decision on.” It’s also a tremendous amount of responsibility: Will CCTV operators be as efficient as Tom Cruise? How will they live with themselves if they make the wrong call? Will sending cops escalate a harmless situation into a dangerous one? Or will the crimes happen anyway — as soon as police turn their backs?

You’d have to be a precog to answer those questions, in which case, what would you need a Perceptrak for?