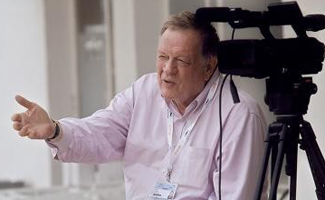 The world of film criticism has been utterly transformed since the advent of the Internet, but there was never any official “changing of the guard” — which is a good thing as far as Shootout co-hosts Peter Bart and Peter Guber are concerned. Both men recall a simpler age when professional opinion traveled much farther than casual conjecture.

On this week’s show, Bart and Guber commiserate with critic Richard Schickel, whose 30 books and over 3 million reviews have informed his new documentary, You Must Remember This, about the history of Warner Bros. Schickel doubts that the brick-and-mortar studios of old would stand a chance in today’s fast-paced market of “super-campaigns, blogging and the Internet,” all of which have made film criticism less relevant.

“There’s been a kind of democratization of film comment,”
says Schickel. “The great days of film criticism are over. When I
started reviewing movies back in the ’60s and ’70s, there was a buzz,
an excitement about movies and commentary upon them, and a lot of
publications upgraded their reviewers so there was vitality. A lot of
that has gradually disappeared.” Schickel criticizes the rise of
alternative media for the glut of flaccid critique in the world, and
Guber and Bart concur. For his part, Schickel tries to keep an open
mind when he sees a new movie, and not let the backstory or the budget
get in the way of his opinion. “No matter what, I try to think ‘Am I
enjoying this?'” he says. “Is it saying something unique? Is there some
performance that’s unexpected? I try to be a member of the audience.”

How long can reviewers hope to muster the vitality required to
generate a steady stream of thoughtful, relevant film commentary?
Surely there’s common ground somewhere between old-school critics like
Schickel, who explains to Guber and Bart that he doesn’t even take
notes during a film lest he get too distracted, and younger voices who
often post opinions to the Web before the movie’s even over, via mobile
devices. Hopefully it’s just a matter of finding it.

What do you think? Do moviegoers listen to critics? Let us know in the comments.