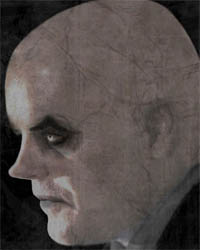 • James Cameron’s The Terminator has been inducted into the National Film Registry as a movie of cultural import. This of course guarantees it will survive the apocalyptic ravages of Judgment Day.

• The New York Times talks about the increasing tendency to bridge series gaps with online webisodes. How else will we learn about minor characters’ sexual orientations?

• Is this Philip Seymour Hoffman dressed up as the Penguin in a new Dark Knight sequel? Probably not, but it’s convincing enough to make me think the fanboys are onto something.

• The BBC only renewed Torchwood for a five-episode third season, which is fine: It’s a terrible, terrible show. But star John Barrowman carping that he wishes he could play the role until he’s 90? Go out with dignity, man.

• Cracked lists the eight most misguided scifi predictions for the year 2008, which includes Escape from New York ‘s Manhattan prison.

• Vintage pulp magazine illustrator Edd Cartier has passed away. I wonder if it had anything to do with how bad The Spirit was.

• Disney’s premature cancellation of the Narnia series has Cinematical wondering if the same thing could happen to Harry Potter. If Warners is acutally pondering this, I don’t think they’ve considered what putting every British actor alive out of work would do to the UK economy.