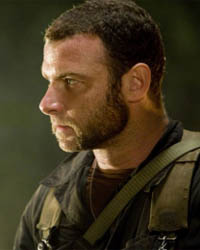 • A heady moral question: Can a robot consent to have sex with you? Well, not with you, but with me? Probably!

• Liev Schreiber is playing Sabretooth in the new Wolverine movie, but apparently he was approached to play Stryker, which might have made more sense for the totally non-animalistic actor.

• If you’ve missed any of the Cartoon Networks’ Clone Wars series, (and actually, it’s worth catching) you’re in luck: It’s now streaming for free online.

• Keanu Reeves is eager to remake and ruin another classic scifi property, this time Cowboy Bebop.

• Everything in science fiction is interconnected if the scale is big enough. Well, everything except for Planet of the Apes and Alien Nation.

• The Forbidden Planet pays its respects to the first lady of Star Trek, Majel-Barrett Roddenberry.

• Questions about the Star Trek universe Popular Science magazine should answer: “What was a redshirt’s chances of survival aboard the Enterprise?” Good question.